Texas Torque will be hosting a robotics camp at our lab this summer alongside Pearadox 5414 and VorTX 3735 to teach FLL (LEGO Robotics) to 5th-8th grade students this summer from July 28-July 30 (1pm-4pm) at The Woodlands College Park High School. If you’re interested in signing up, please fill out the Google Form (forms.gle/L8SXYUiBjaord3wEA) and we hope to see you there!

Each year, Texas Torque hosts the Robot Remix, an off-season event that provides an exceptional competitive experience for both rookie and veteran teams alike and serves as a fantastic way for individuals to challenge and enjoy themselves. This year, 32 teams from all over the continent will face off in Destination: Deep Space, the game from the 2019 competition season.

Texas Torque also uses the Remix as an opportunity to give back to the community through LEGO kit and bedding drives. The LEGOs are donated to local children’s hospitals, while the bedding is given to Angel Reach, an initiative to help young homeless adults. All profits from the Remix are also donated to the Montgomery County Women’s Shelter.

The competition will be held at the Texas Torque World Headquarters (location of the Lone Star North 2018 Regional) on October 26th.

If you would like to volunteer, please visit this link.

For more information or to register your team, visit this link.

Texas Torque’s last event of the 2019 season was the Houston World Championship at the George R. Brown Convention Center and Minute Maid Park. This was the biggest event of the year with over 400 teams attending.

Texas Torque was in the Hopper Division along with 67 other teams to compete for a chance to play during Einstein rounds. After many successful qualification matches, Texas Torque ended with an 8th rank and a 7-5-0 win-loss-tie record. Texas Torque picked team 4020 Cyber Tribe, 4063 TriKzR4Kidz, and team 3635 Flying Legion to complete the 8th seeded alliance.  During the playoffs, our alliance was eliminated in the quarterfinals.

Texas Torque participated in the Week 4 District Del Rio Competition this past weekend alongside nearly 40 other teams. After a great series of qualification matches, the team finished Saturday night at Rank 1 excited for the day to come. On Sunday, despite multiple technical problems, the team finished the rest of the qualification matches with a record of a 10-2-0 (wins-ties-losses) and earned 22 Qualification Points. Torque’s final alliance partnered them with close-by Team 5892 Energy HEROs from Houston, Texas and Team 5894 J.E.H.S. Cyber Jags from Edinburg, Texas.

Elimination matches were tough but the team was able to make it to the semifinals with our great alliance members. Congratulations to the winners; Team 7521 Ultimate Robotics,  Team 7088 Robodogs, and finally alliance captain Team 6377 Howdy Bots!

While disappointed by the robot’s results, the team was able to end the competition on a high note since we won the Chairman’s Award! This has continued our four year Chairman’s winning streak! Be sure to check out our chairman’s video below:

The Del Rio Recap video can be seen below:

The team will be competing in the First in Texas State Competition in two weeks and are excited for what we will accomplish there! Keep up with our Twitter, Instagram, Facebook, or The Blue Alliance for updates on our progress.

Last weekend, students, mentors, and parents of Texas Torque traveled to Channelview, Texas to compete for our first competition of the season. Ray, the 2019 robot, competed in 10 qualification matches and ended in rank 13.  Texas Torque joined the alliance captain team 5261 Cyber Shock and Team 7494 Circuit Bizurkers to compete in the elimination rounds as the fourth seed alliance. The teams advanced to the finals and ended with a 9-9-1 record. Although there were some problems with the robot, overall Texas Torque performed very well. Congratulations to Team 624 Cryptonite, Team 3834 Crab-bots, and alliance captain Team 5892 Energy HEROs for winning the district championship. 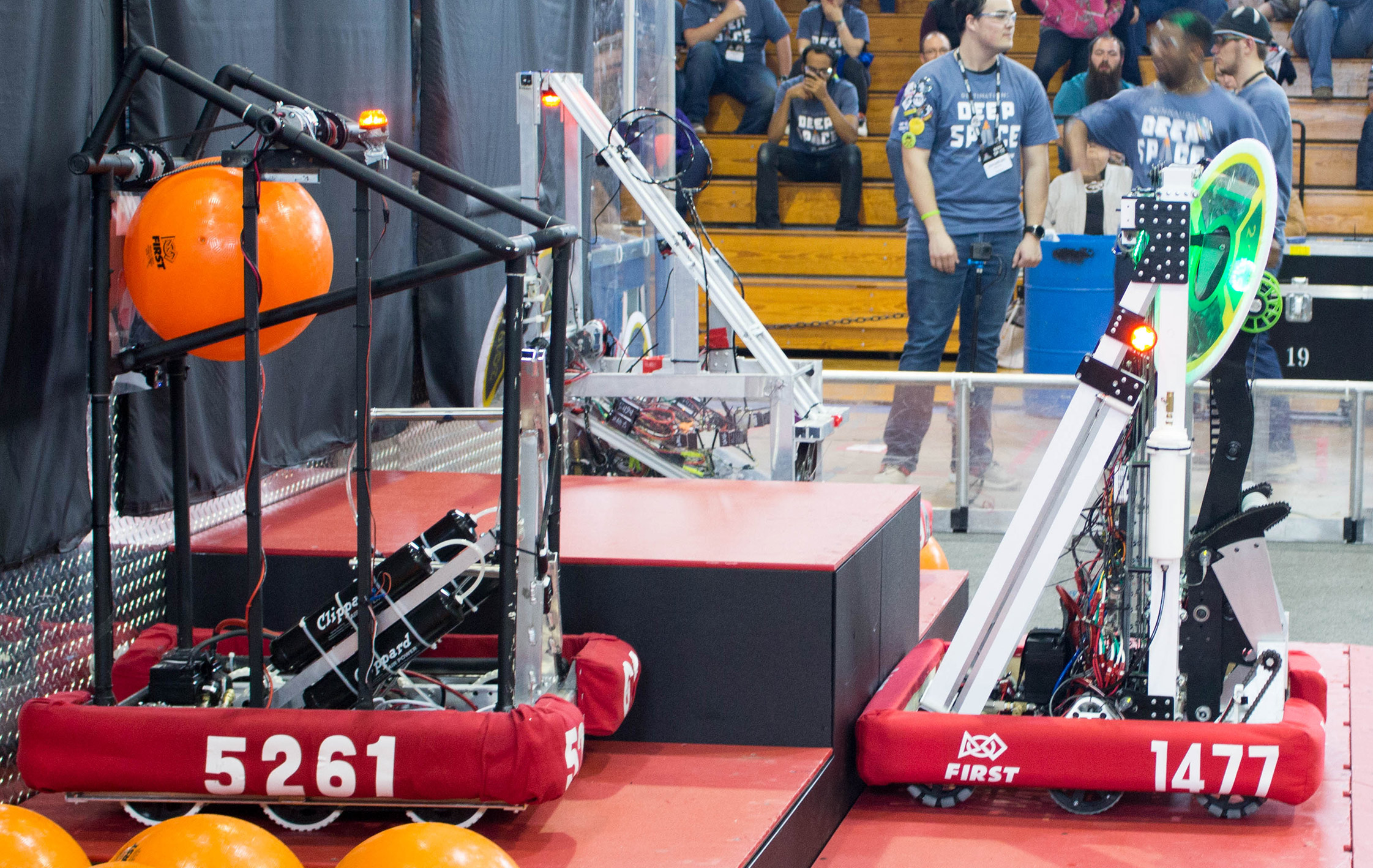 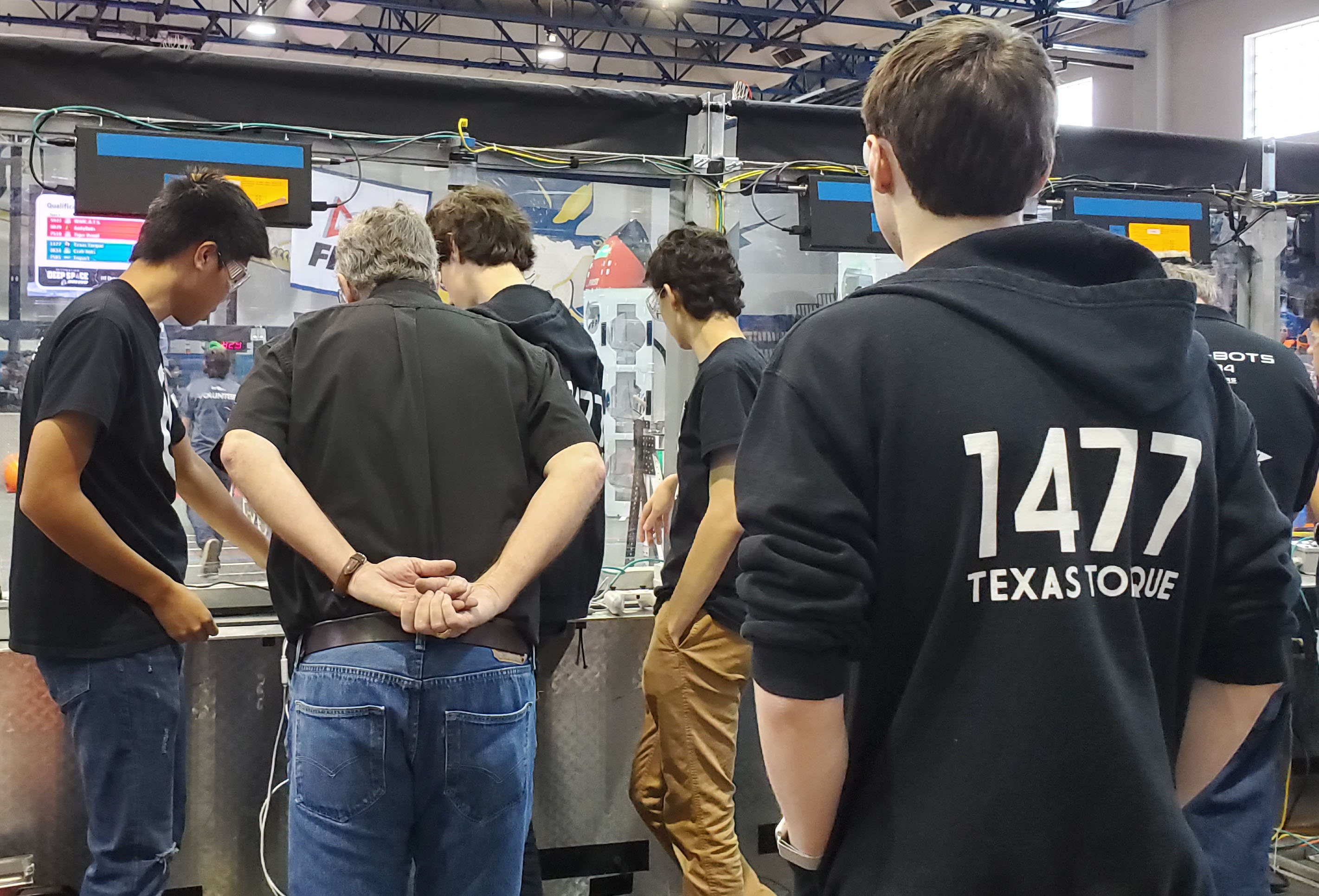 Check out our Channelview Recap video!

To keep up with the District Del Rio Event that we are competing at this weekend, be sure to follow us on Twitter, Instagram, Facebook, or The Blue Alliance for updates on our progress.

The 2019 competition involves a space themed game in which two teams of three robots compete to grab disk shaped “hatch” panels to place on a “rocket” or a “cargo ship”, then place “cargo” kickballs afterward. In the first 15 seconds of the game, a sandstorm, or black curtain, is lowered in front of the drive teams, instead of the autonomous periods in past years. At this time, teams can control the robot using visual feedback from the robot and its cameras and sensors. After the initial sandstorm, the curtain is then raised for the tele-operated period. In the last 20 seconds of the match, teams return their robots to the habitat platform and scale different levels of steps to gain additional points.

The following video released by FIRST further explains the challenge.

Following the exciting reveal, Torque members spent the next few hours brainstorming and discussing design and strategy for the game. Students collaborated with mentors and alumni to come up with prototype ideas and strategies to maximize match scores. For the next six weeks, team members will work to design, prototype, construct, and program a new robot for the season before the seven week competition season begins.

Texas Torque wishes all teams the best of luck and hopes that everyone has fun this season!