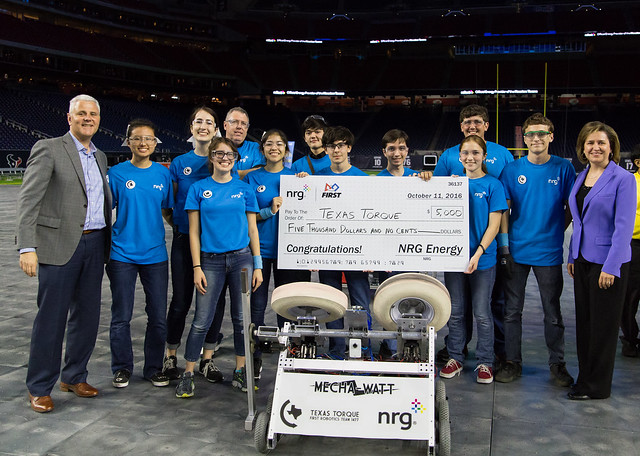 This past Tuesday, October 11, members of Texas Torque participated in NRG’s FIRST Robotics Showcase at NRG Stadium. For the competition, four of the teams that NRG sponsors – 1477 Texas Torque, 4587 Jersey Voltage, 3847 Spectrum, and 3735 VorTX (formerly Klein Bots) – were challenged to build a robot capable of completing football-inspired challenges. The robot had to be able to throw a football for distance and accuracy, kick for distance, and complete an agility course. The four teams involved also got to participate in a Q&A session with Houston Texans players Vince Wilfork and Christian Covington to discuss football, robotics, and STEM.

The competition was fierce, but at the end of the day, it was Texas Torque that came in first place and took home the check for $5,000. We got a real kick out of competing in such a fun challenge, and we hope everyone else had as much of a ball as we did!

Don’t pass up on your chance to attend The Remix, which will be held this Saturday at our own College Park HS. More information about this event can be found here. We hope to catch you there!