This past weekend, Texas Torque took part in one of the last FIRST Robotics Competition (FRC) Regionals in the 2014 season: the Lone Star Regional. Of the 15 years that the Lone Star Regional has been active, Texas Torque was proud to make this their 11th appearance — and a solid one at that. Sixty-seven teams were present, including two teams from China and three teams from Mexico.

The team quickly reaped the benefits of the two weeks of fixes and practice between the Dallas Regional and this event, winning the first match 231 to 16 with longtime partners, FRC 624, CRyptonite. Throughout the first day of competition, Texas Torque only lost one match.

The second day brought even more successes, as Texas Torque won every qualification match in the morning. By the end of the day, Texas Torque was ranked 2nd of the 67 teams at the regional, falling beneath FRC 148, Robowranglers, by only 20 Assist Points. In the alliance selection, we were elated to welcome CRyptonite, our historic partners, as our first pick on our alliance. The pair decided to pick FRC 3997, The Screaming Chickens, to complete the alliance.

In the elimination rounds, Texas Torque, CRyptonite, and The Screaming Chickens won the quarterfinal and the semifinal rounds handily. Semifinal 2-2 was especially intense, as the 2nd seeded alliance set the high score of the regional without fouls (275). In the blink of an eye, the finals were upon us, and our 2nd seeded alliance was up against the 1st seeded alliance of FRC 118, FRC 148, and FRC 2585. Both alliances played at their best, but in the end, the first seeded alliance came out on top. 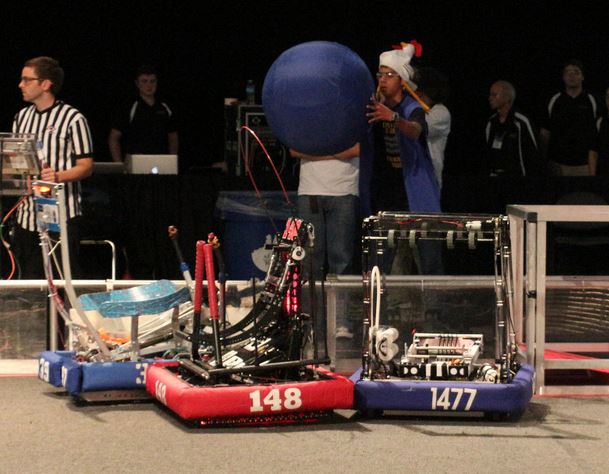 Torque fights past FRC 148, the Robowranglers, for the ball.

Texas Torque was glad to bring home the Industrial Design Award and a Finalist trophy. In addition, Texas Torque congratulates FRC 3103, Iron Plaid for their Engineering Inspiration Award, and FRC 3847, Spectrum, for winning the Chairman’s Award at the Lone Star Regional.

All in all, the team is happy with their performance at the 15th Annual Lone Star Regional. We would like to thank all of the Lone Star Region administration and volunteers for all of their hard work in making this such an amazing, well-organized event. Of course, we congratulate the 1st seeded alliance for their well-fought victory and thank our own alliance partners for all of their effort. We can’t wait to see many of these teams again at the World Championship!