After two weeks of planning and designing robots for 2015’s game Recycle Rush, we started to build prototypes and finalized the process of prototyping. The prototypes are expected to be finished by the third week of our six-week build season.

Our programming and electrical subteams worked on our old robots this week. We were able to see Sonic, VelociRiptar, and Sarge back up and running. Our robot Sarge was reprogrammed and tuned. VelociRiptar was re-stripped and all electronics were redone, while some mechanical issues were fixed.

The Hydraulic Press’ wheels are fixed to mobilize so members of Texas Torque reduce risk of injury while working in the lab. We also milled the gearbox plates for the gearbox to keep dimensions correct during all prototyping and building, our first milled parts of the season.

Texas Torque hosted a successful sponsor open house on Saturday, January 17th. On this day, we also celebrated the birthday of our team captain, Matt Bartell. Team 5469 Flair and team 3735 Kleinbots came to the Texas Torque World Headquarters to learn about the new technology RoboRIO to boost their success in the 2015 season. 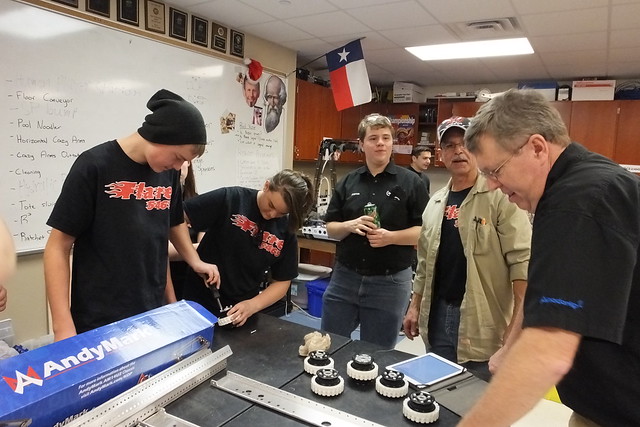