In addition to the Houston Astros vs. Detroit Tigers game, there were FIRST teams all around Minute Maid Park this past Sunday. Texas Torque joined forces with robotics teams from around Houston to demonstrate their hard work and “Make it Loud”. Texas Torque was pleased to have organized this event for the second time in a row, and hope to establish this as an annual off-season event for all of the teams in the Houston area. 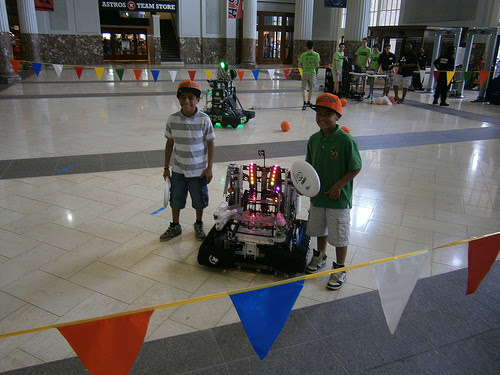 Starting early in the morning, robots could be seen everywhere in Minute Maid Park. 1477 Texas Torque and 624 CRyptonite demonstrated their 2013 robots from Ultimate Ascent in Union Station, much to the entertainment of the crowds. Our team members were happy to encourage the young children in attendance to join FIRST robotics teams in their schools. Just outside the entrance gates, robots from Aerial Assist performed alongside eachvother, propelling the 2014 game pieces into the air. As the Astro’s game spectators walked along the park’s inner rim, all of the teams had booths set up, playing release videos, showing off 2012 robots, and handing out stickers, buttons, and brochures. All of the teams in attendance were happy to answer the questions from the crowds and were proud to promote FIRST in our community.

FIRST Pitch was a huge success thanks to support by the Astros’ administration and management. We hope to continue our partnership with them, so that we may promote FIRST in the years to come.

A huge shout out to the other teams in attendance, 624 CRypotnite, 148 Robowranglers, 3847 Spectrum, and 2587 Discobots. Texas Torque would like to thank these teams again for their time, support, and participation in this event. 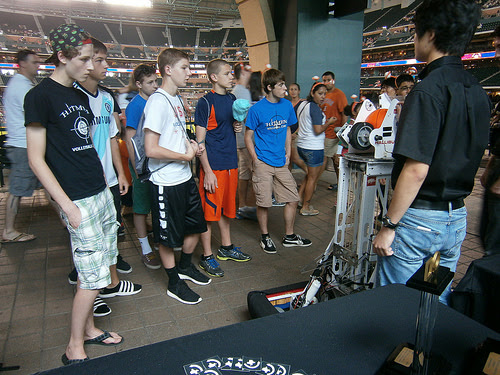