From July 14th to the 15th, Texas Torque competed in the Indiana Robotics Invitational, an off-season “All-Star” event held in Indianapolis, IN. We were thrilled to have participated as one of the top 68 teams competing from all across the United States, Canada, and Mexico.Texas Torque is grateful for the opportunity to travel together with 3847 team Spectrum to Indianapolis. 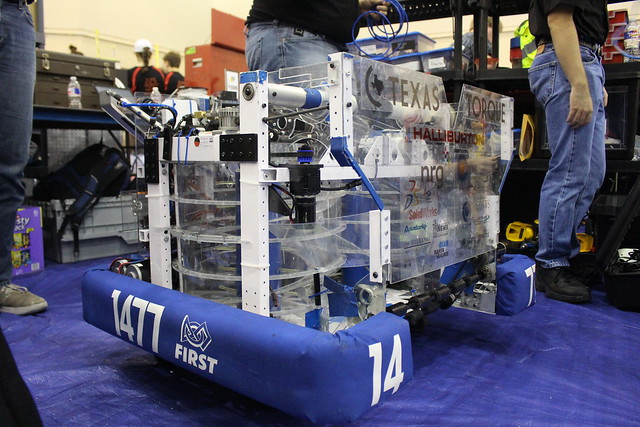 Qualification rounds began on Friday, in which Texas Torque competed in nine matches. During the qualifications Texas Torque suffered some issues including gear intake breaking and autonomous modes not successfully working. Unfortunately, we did not perform in the elimination rounds due to other well performed robots on the field. Texas Torque members were still excited about world’s top class robots all in one place competing at the IRI.

Texas Torque is grateful for the opportunity to compete against some of the best teams in the FIRST Robotics Competition, as well as to have had such a great learning opportunity to prepare the team for the upcoming build season. We would like to thank teams 45 TechnoKats, 234 Cyber Blue, and 1024 Kil-A-Bytes for hosting such the event, as well as Indiana FIRST for organizing and streaming the competition. We would also like to congratulate teams 1619, 195, 2590, and 1710 for winning this years IRI competition, with a special shout out to the third member of the winning alliance, 1625, whom we had the pleasure of partnering with earlier this year.