Competition season may have ended, but there was no shortage of robotics action last weekend at the 2017 Texas UIL State Championship. Teams from all across the Lone Star State came to the Austin Convention Center for two exciting days of off-season competition. The event is in its second year and also includes an FTC division. 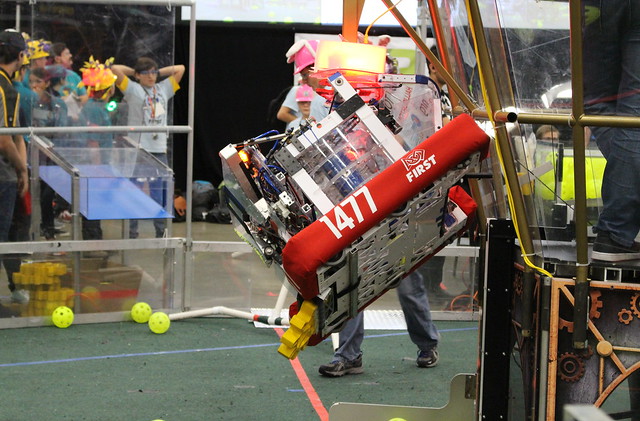 During an exciting Day 1 and some tough qualification matches against many excellent teams, the team successfully showcased Corliss, our 2017 robot, and its unique abilities. During alliance selections, Texas Torque was invited to join team 148, the Robowranglers, on the 2nd-seed alliance. We then invited team 5417 Eagle Robotics to join our alliance. Throughout the elimination rounds, our alliance performed well, efficiently scoring points and working together. In the finals, however, we were defeated by the 1st-seed alliance. (The captains of the 1st-seed alliance, team 118 the Robonauts, won last year’s inaugural UIL championship; we congratulate them on successfully defending their title!)

We would like to congratulate teams 118, 3310 and 6547 for winning the second Texas UIL State Championship. We had a great time playing against y’all, and we look forward to seeing you at future off-season events!