Texas Torque had yet another very successful demo at Comicpalooza, held at the George R. Brown convention center this past weekend. Our team managed to handle the problems that arose well, including the breakdown of both our robots, Sonic and Rev1 by the third day. 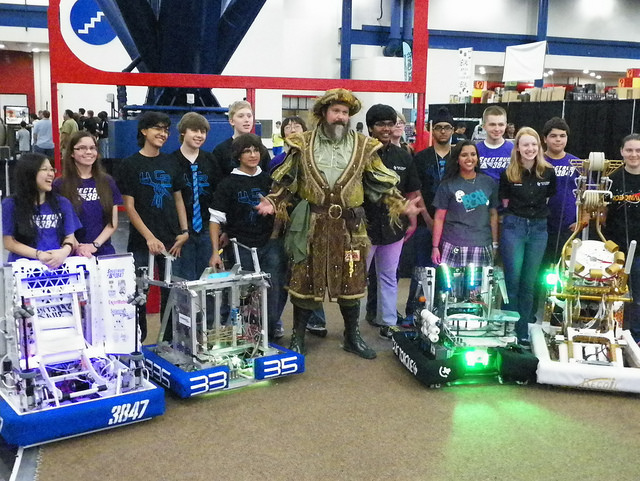 Saturday, Rev1 was performing well for interested spectators, the team effortlessly awing the crowd. Some of Texas Torque and other teams members played a casual game of lasertag, demonstrating that robotics kids can have lots of fun while they work. Later R2D2 and other robotic celebrities came by to visit their competitive friends and posed for a few group photos. After a long day of running, Rev1 was having some mechanical problems so he stayed home for a repair party while Sonic stepped in and took his place on Sunday. In between speaking about FIRST, operating the robot and fetching frisbees, a few members from Texas Torque and the Robonauts had a game of Mech Corps, Torque ultimately coming out on top while the others easily kept the robot running smoothly. At the end of Day 2, Comicpalooza seemed to be too much excitement for old Sonic to handle and by Monday he refused to run. However, that didn’t stop us. We continued to shoot frisbees as a show and supported the other robotics teams present with batteries and tools. The owner of the batmobile stationed in the convention center came by and was one of the many spectators that Torque spoke to. Impressed with our team work and kindness he invited the teams over to his batmobile where he explained the inner workings of the movie prop and even allowed one of our members to climb inside.

Throughout all three days of demonstration, Texas Torque didn’t just show off it’s impressive robot. Torque showed the amazing teamwork it takes to build such a robot, it’s passion in spreading FIRST to a broader community, and it’s ablity to create friendships with other team members outside of Torque, whether it’s through playing lasertag with the Disco Bots, Mech Corps with the Robonauts, or catching frisbees with Spectrum. Torque also advanced within itself where members who didn’t know how were able to learn to drive and operate the robot showing grand potential for the future drive team, ready to lead us to the champs again next season.

The teams lined up for a group photo with the robots.