Texas Torque traveled to St. Louis, Missouri, for the international FIRST Championship held from April 25-28. With over 400 FRC teams competing, the competition was divided up into four divisions – Newton, Curie, Galileo, and Archimedes – played on identical fields. Texas Torque was placed in the Curie division along with other powerhouse teams such as 624 CRyptonite, 987 High Rollers, 341 Miss Daisy, and 254 Cheesy Poofs. Seeding low in the qualifying matches due to mechanical failures, Texas Torque joined up with the 6th seed alliance captain 3528 Up Next! and 1741 Red Alert for the elimination matches. After losing their first quarterfinal match by two points, the alliance managed to pull out ahead in the next two matches, winning each with a narrow margin of one point. Despite putting up scores in the 80’s during the semifinals, the alliance lost its last two matches when faced with scores in the triple digits put up by the 987-led alliance that went on to win the Curie division and compete in the finals on Einstein. 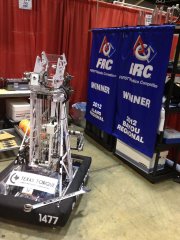 In addition to competing, Texas Torque students participated in the FIRST Student Ambassador program. Marta Rippetoe, Teju Kishore, Amanda Lebsack, and Eric Menees volunteered their time to spread their knowledge and love of FIRST with VIPs and delegates from around the world. As the diplomats of FIRST, they gave guided tours of the pits and competition floor. They explained the various levels of competitions to executives from companies such as Boeing and MasterCard, giving them a personalized version of the FIRST experience and the opportunities it provides for students. Junior Eric Menees sums up his experience ambassadoring,”If I can impart even a fraction of the love I have for FIRST to someone unfamiliar with the program, I will have been successful. To paraphrase Dean Kamen, all it takes is that first spark and they’re hooked.” 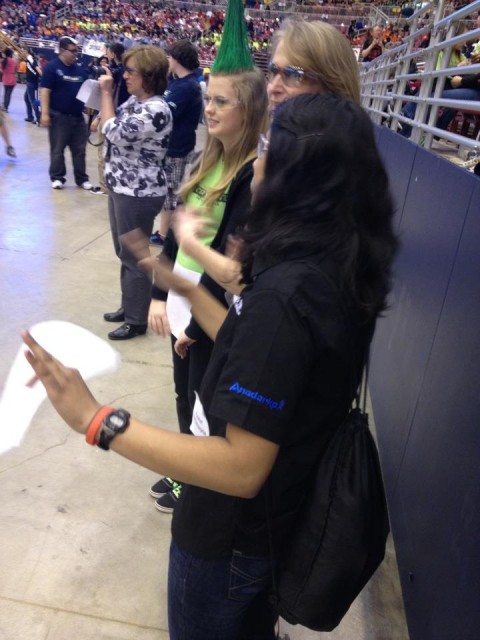