Along with four other award-winning FIRST teams from around the nation, Texas Torque was chosen to kick off the festivities at the Macy’s Thanksgiving Day Parade in New York, New York. As the winner of the 2013 FIRST Robotics Competition Championship, Torque, in particular, was given the special honor of cutting the ribbon at the start of the parade. The weeks before the event were spent preparing the award-winning robot, SONIC, for the 2.5 mile journey and equipping the robot with the golden scissors supplied by Macy’s. The other teams attending the event were to build contraptions capable of shooting confetti during the parade.

In New York, four representatives of Texas Torque joined members of FRC 1538 (The Holy Cows), FRC 16 (Baxter Bomb Squad), FRC 25 (Raider Robotics), and FRC 180 (S.P.A.M.) in anticipation of the event. The Holy Cows and Texas Torque were featured in a morning news segment by Fox and Friends, adding to the multiple media appearances over the course of the week. In the highly-anticipated moment, Texas Torque and the other four teams made history by becoming the first robotics teams to begin the festivities at the Macy’s Thanksgiving Parade, an event now witnessed by the 50 million viewers of the parade nationwide. SONIC successfully cut the red ribbon, and all teams and robots traveled the full length of the parade. 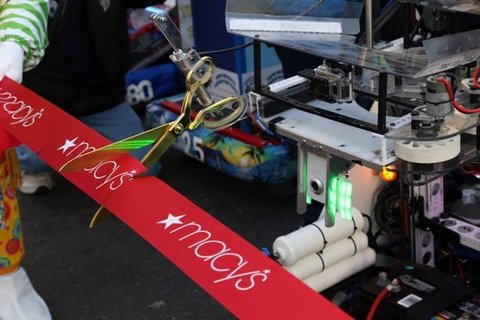 FRC 1477, Texas Torque, would like to thank FIRST for the honor of representing the organization on the national stage. In addition, the team thanks the Macy’s Thanksgiving Day Parade administration for the incredible opportunity and their support of the FIRST program, as well as FedEx and Southwest Airlines for their services and their partnership with FIRST. All supporters and sponsors of Texas Torque deserve our utmost gratitude for all of their help throughout this amazing year.